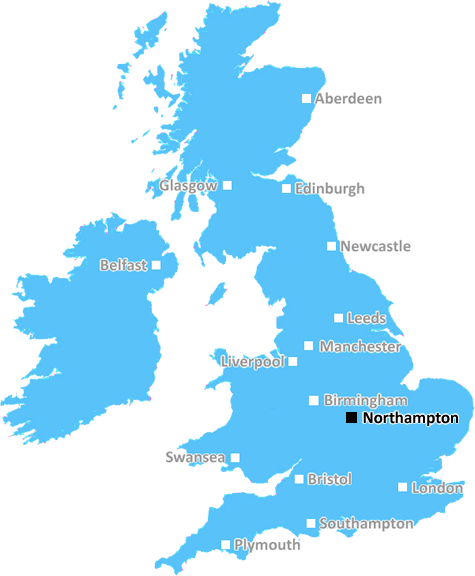 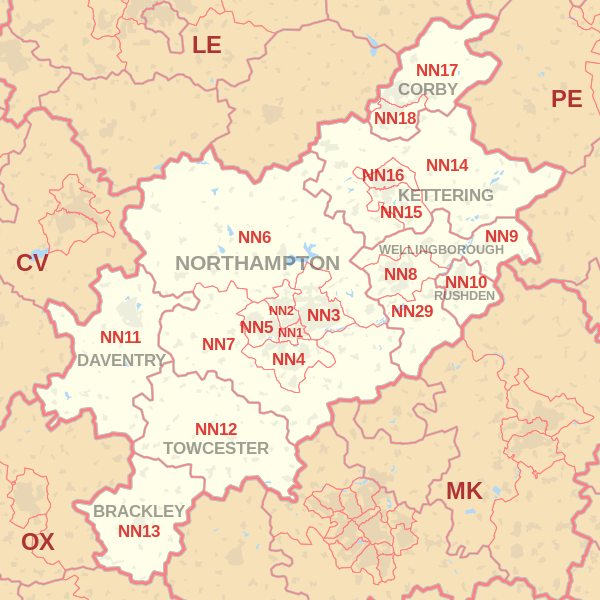 Each 'outward' postcode give you a comprehensive list of all postcodes within the outward code area (NN) and estimated address. 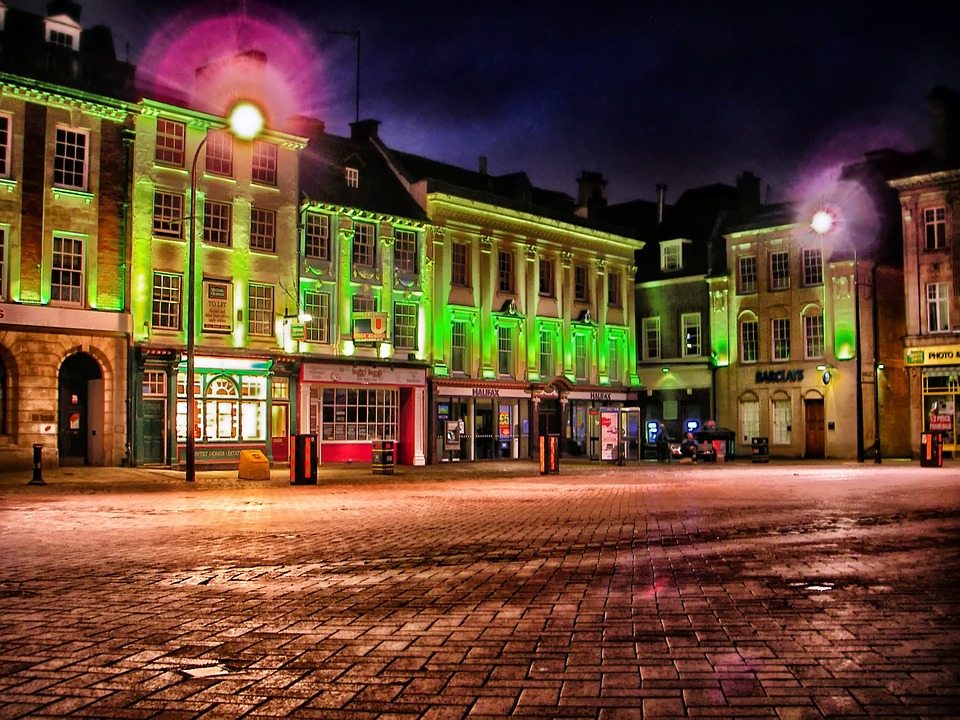 Northamptonshire is a county in the picturesque Midlands region that offers the quintessentially English combination of small charming villages, timbered cottages and country gardens, as well as winding country lanes breaking up endless fields and meadows. It seems to offer historic sites at every corner, from ancient Saxon churches to stately homes and sprawling country estates. Then again it has always attracted historic events.

The village of Naseby was the site of the Battle of Naseby in 1645 where Fairfax's army won and effectively ended the English Civil War and a monument stands there to this day. William the Conqueror built his royal Rockingham Castle in Northampton, which Henry VIII later gave to Edward Watson, ancestor of the current owner. The castle is essential viewing, mostly Tudor in design with Norman walls and works of art from every century. In addition, the stately homes of Lamport Hall, Canons Ashby House, Coton Manor, Southwick Hall and Althorp (home to the Earl of Spencer) are also found in Northamptonshire.

For those looking for outdoors pursuits, Northamptonshire is still an agricultural landscape and beautiful ancient woodlands such as Rockigham Forest have been the site of hunting by Kings of England for hundreds of years. Similarly there are miles and miles of canals and river ways and large picturesque reservoirs to enjoy sailing, canoeing, swimming and windsurfing.

In addition, Northamptonshire has hundreds of miles of cycle ways, bridal paths and walking trails passing through breathtaking countryside and numerous villages centered around ancient churches. Not for nothing is it known as the County of Squires and Spires. If you fancy seeing these spires without the walking, one delight of Northumberlandshire is the Nene Valley Railway, the UK's best Steam Railway, which takes a 15 mile round trip through the gorgeous Nene Park. Add in the fascinating county town of Northampton and you have a midlands county that is well worth a weekend away.

The Northampton postcode region (NN) contains 19 unique 'outward' codes. Northampton is the main postal town/district for this region, with all postcodes starting with the following outward codes.

There's plenty of local information, guides and useful data to browse and explore, whether you're a Northampton resident or a visitor to the area.

Scroll down to discover all you need to know about the Northampton postcode area.

Covid: Why are UK cases so high?

The UK has higher infections than most of its neighbours, as scientists fear a difficult winter.

NJC Circular re Return to Working from Home Dec 2021

Please find attached here the NJC circular following the announcement from the Government on its guidance to return to working from home.

What are the latest rules for face coverings and masks?

People in England will soon no longer be legally required to wear facemasks.

Today (Wednesday 27th October) the All Party Parliamentary Group on Social Integration released a new report, Building stronger communities in post-pandemic Britain. A copy of the report can be found&…

Women's safety: 'I begged the bus driver to let me travel home safely'

A disabled woman calls for a greater understanding of female safety after she "begged" a bus driver to let her travel home.

Nick Knowles and his team are working to renovate the home of the McAuley family.

This week’s Briefing includes updates on:Planning pilots announced, with two pilots in the East MidlandsOperation Warm Welcome: progress updateApprentice of the Year 2022, Save the date Wed…