Saturday, Saturday, March 14, 2020
The Dukes, Lancaster
In his hilarious, daring new show ‘Blah Blah Blacklist’ Daliso looks at disgraced blacklisted celebrities and historical figures we're ashamed we once admired and who now have let us down. There's also the small matter of family member arrests, exploding buildings in his home country, the enterprising Malawian who tried to blackmail Daliso and being accused by some of his own community that he’s 'not Black enough'… .

Saturday, Saturday, March 14, 2020
The Sugarhouse, Lancashire
PierJam and Escape Events are pleased to announce that they are joining forces to bring House music’s leading lady, Sam Divine, to Lancasters Sugarhouse Nightclub on Saturday the 14th of March. Often considered as the Queen of the world renowned Defected Records House music label, Sam Divine is a force to be reckoned with in the DJ world at the minute and continues to go from strength to strength within the industry.

Saturday, Saturday, March 28, 2020
The Platform, Morecambe
Re-live the sounds of the swinging sixties, as Britain’s No. 1 tribute show brings alive the magic of the sixties with their tribute to over twenty five bands of that era.

Friday, Friday, April 10, 2020
Morecambe Winter Gardens Theatre, Morecambe
Morecambe’s Winter Gardens the town’s oldest surviving theatre, is one of the town’s most haunted buildings! One ghost is said to be that of a seamstress who never achieved her dream of becoming a dancer and so still haunts the dressing rooms, people have reported ghostly goings on in the auditorium, the stairwells and the bar. There are also numerous stories of people being poked, prodded, slapped and pushed, as well as a brown cloaked figure running around backstage.

Friday, Friday, May 15, 2020
Williamson Park Car Park, Lancashire
Leading proceedings in Lancaster's Williamson Park on Friday 15th May are genre-hopping, chart-conquering, Mercury Prize-nominated British four-piece Rudimental (DJ set), who will perform what promises to be a barn-stormer of a set on the opening night, including hits like 'Feel The Love', 'Free' and 'Waiting All Night'. Wilkinson, one of the world's biggest names in drum and bass, also joins the Friday line-up.

Saturday, Saturday, May 16, 2020
Williamson Park Car Park, Lancashire
Following a hugely successful 2019 weekender, Highest Point will return to Williamson Park in Lancaster from the 15th - 17th May 2020. The first artist announcement sets an impressive tone for what will be one hugely diverse fun-filled musical weekend as London drum and bass collective Rudimental and dance music heavy weight Wilkinson lead the charge for Fridays DJ line-up while Saturday’s activities will be in for giant reception headlined by Brit award-winning singer Rag'n'Bone Man.

Saturday, Saturday, September 19, 2020
LA12 7BJ, The Gill
The Cumbria Way Ultra follows the iconic Cumbria Way trail heading south to north through the Lake District, from Ulverston to Carlisle Castle. The event is open to Solo runners and Relay Teams of 5.

Dear Sir or madam due to the success of the last bike coding event, we will be holding another event on 21st February.This will be at Palatine Library at 2-4pm on St.Annes road. Just come along on th…

Dear Sir or madam We have recently been made aware of ASB issues in Bullough Park via feedback on Lancashire Talking.In response to this I have deployed the Hyndburn and BWD Task Force to the park and…

Dear Sir or madam We want to let you know that a new police base has opened in the heart of Grange Park in Blackpool.The base at @TheGrange on Bathurst Avenue will replace the office that the Grange n… 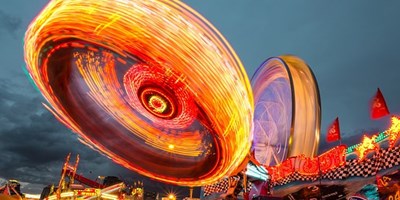 We've teamed up with events listings guide BritEvents to bring you the best events in and around LA4 5UB in the coming days and weeks.