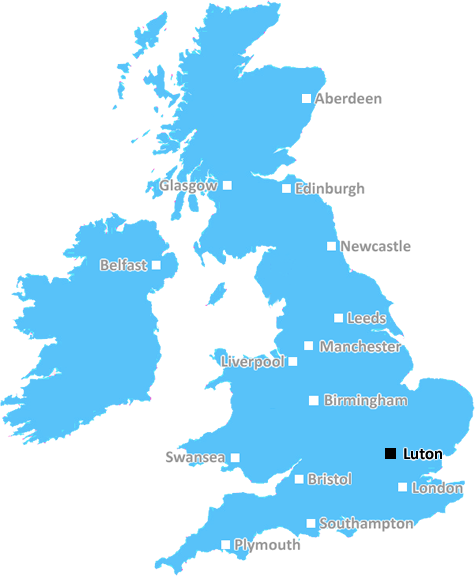 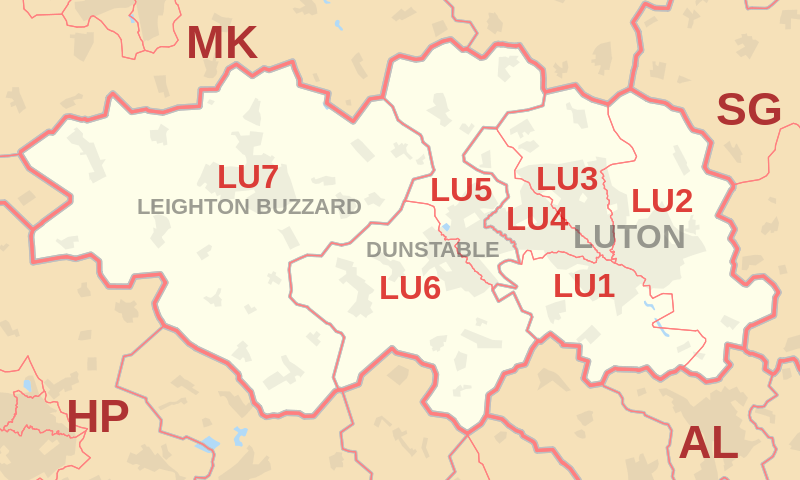 Each 'outward' postcode give you a comprehensive list of all postcodes within the outward code area (LU) and estimated address. 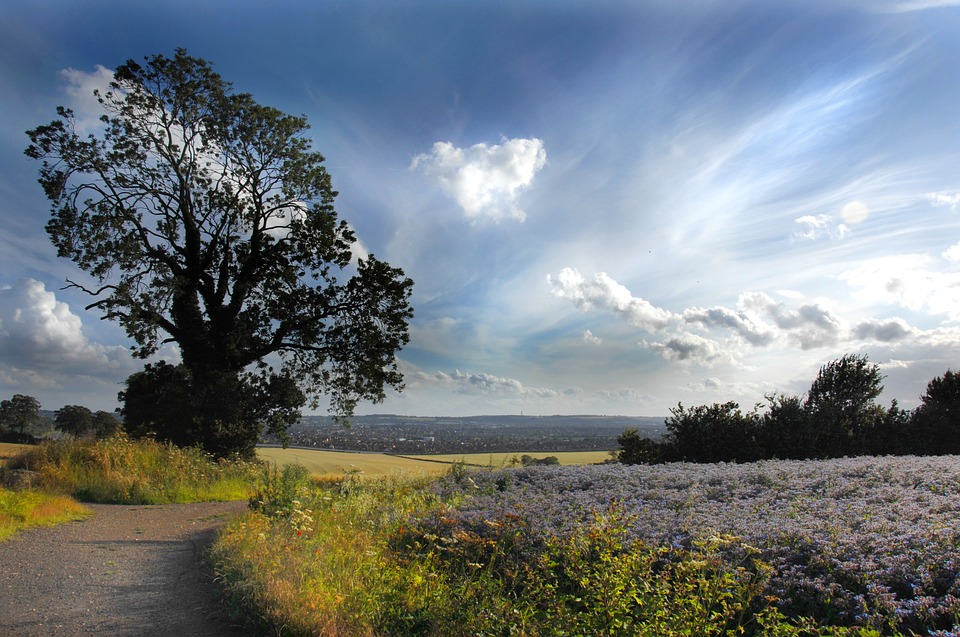 Amazingly, considering how much there is squeezed in, Bedfordshire is England's smallest county. Perhaps what makes it look so deceptively large are the never ending undulating green fields, cosmopolitan towns and luscious rivers.

With such beautiful and valuable farmland it is little wonder that the area has been attracting new settlers for thousands of years, since it was the homeland of the ancient British Cantvellauni Tribe. From then on it was continually occupied by either the Romans or the Anglo Saxons or Danes, and was for a while known as the Kingdom of Mercia. The region's most famous son John Bunyan began the Pilgrim's Progress in Bedford Prison and a stone marks the prison's original site. In addition there is a museum and a statue in front of the church of St Peter, as well as a meeting-house named after him. For history buffs the county also has Woburn Abbey, ancestral seat of the Dukes of Bedford, built on a medieval abbey and sitting in parklands of over 3000 acres; now of course, a famous safari park. In addition there is the house at Luton Hoo built by Robert Adam (and with gardens landscaped by Capability Brown), the 19th century 5 arch bridge over the River Ouse and hundreds of old churches scattered throughout the region.

But Bedford is really all about the landscape and the rolling Chiltern Hills and Dunstable Downs - from the undulating pastures and farms set in the River Great Ouse Valley and the vast waterway and tributaries of the river itself to forests of alder and willow and endless meadows, thatched cottages, market gardens and ancient villages such as Cardington, Bushmead and Roxton.

Bedford itself has one of the most impressive riverside settings in all of Britain looking out over the River Great Ouse from Castle Mound. Well worth a visit it is a cosmopolitan and exciting town with arts and culture festivals all year round and a number of fine museums.

The Luton postcode region (LU) contains 7 unique 'outward' codes. Luton is the main postal town/district for this region, with all postcodes starting with the following outward codes.

There's plenty of local information, guides and useful data to browse and explore, whether you're a Luton resident or a visitor to the area.

Scroll down to discover all you need to know about the Luton postcode area.

The unveiling close to the site where a group of servicemen died is "moving" and "a fitting tribute".

Lucy was diagnosed with ADHD at 22 years of age, after being told she'd have to wait two years on the NHS.

An investigation finds money, intended for a school, was taken by an organised crime group.

The roof of the three-storey building has partly collapsed although there are no reports of injuries.

Exeter maintain their good start to life back in League One with a 3-1 win over Wycombe at St James Park.

Bristol City claim their first win of the Championship season with convincing display against Luton Town despite going down to 10 men.

The schoolgirl came up with idea for Hands Across the Skies after see scenes of the war on TV.