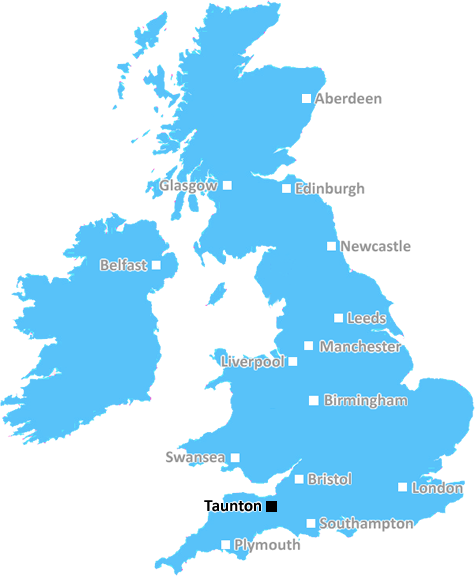 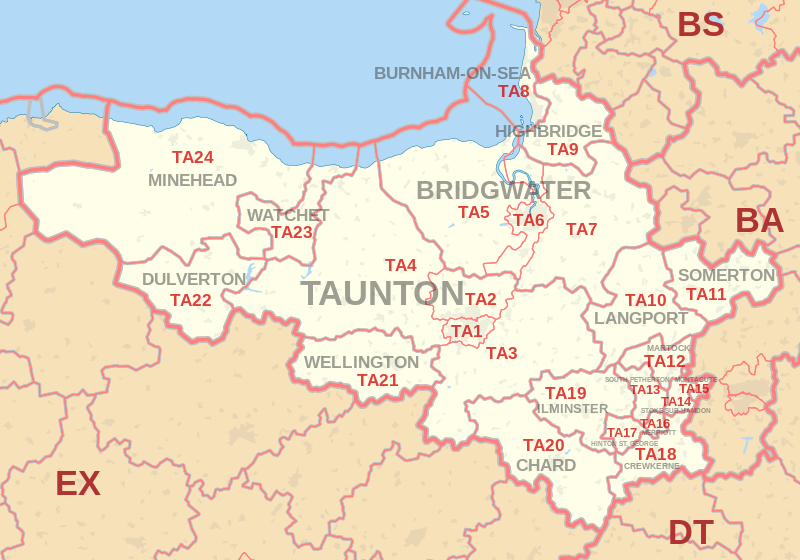 Each 'outward' postcode give you a comprehensive list of all postcodes within the outward code area (TA) and estimated address. 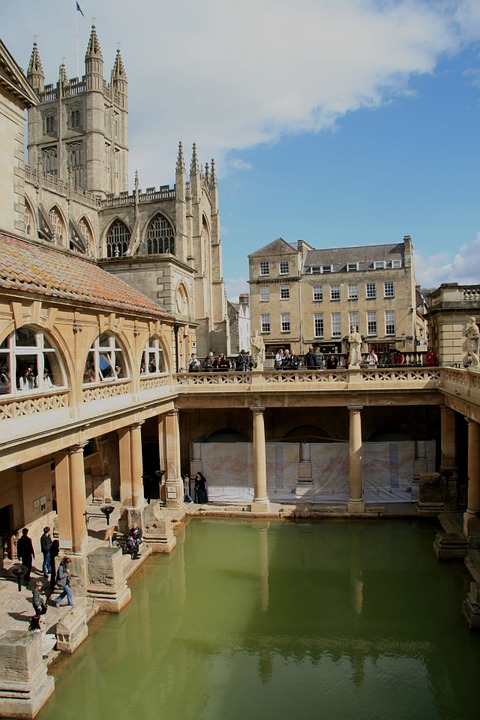 If you want to experience the real English countryside then few places offer a better example than Somerset. From the gentle pace of day-to-day life, to the endless broad fields and haystacks, cattle and combine harvesters, to the hundreds of tiny picturesque villages and cottage gardens, ivy clad pubs and windy country lanes, Somerset is certainly the county to get away from it all.

That's not to say there is no excitement there. Head over to the caves at Wookey Hole which have been used by humans for over 50,000 years and are surely the most spectacular (and eerie) caves in all of the UK. Alternatively there is the awesome Cheddar Gorge, a limestone gorge in the Mendip Hills and site of numerous caves with fantastic stalactites and stalagmites.

The near vertical cliff faces of the gorge and the steep grassy slopes make for an awe-inspiring landscape and it is no surprise that Cheddar Gorge was recently voted the second greatest natural wonder in all of Britain.

And if the combination of Wookey Hole and Cheddar Gorge was not enough, Somerset also features Exmoor National Park, an incredible area of wide open moorland, coast and countryside. Exmoor is famous for its wild red deer and Exmoor ponies and is one of the UK's finest National Parks with several areas declared Sites of Special Scientific Interest because of their flora and fauna.

From Exmoor to the Brendon Hills to the Quantocks, Somerset has some of the UK's best scenery. It also has some of the most historical sites, from Cadbury Castle to Glastonbury Abbey and towns and villages from Wells to Taunton. As if that wasn't enough there are the cities of Exeter and Bath, famous world-wide.

From the cathedral and roman remains in Exeter (and its wonderful bohemian nightlife) to Bath's World Heritage Site and tourist mecca - its Roman Baths, Bath Abbey, the famous Royal Crescent and the incredible selection of Georgian architecture, Somerset is a country that really does seem to have been given it all.

The Taunton postcode region (TA) contains 24 unique 'outward' codes. Taunton is the main postal town/district for this region, with all postcodes starting with the following outward codes.

There's plenty of local information, guides and useful data to browse and explore, whether you're a Taunton resident or a visitor to the area.

Scroll down to discover all you need to know about the Taunton postcode area.

The daughter of defendant Penelope Jackson says she saw her father being violent to her mother.

Fast bowler Josh Davey tells BBC Points West why he loves playing for Scotland, and how he came to realise he could represent them.

The exhibition features a rescue pet who healed an anxious family, a wedding and unexpected beauty.

The metro mayor will put up posters in businesses and adverts in papers to help raise awareness.

Budget 2021: English city regions to get 6.9bn for public transport

The chancellor will announce increased funding for tram, train and bus services in England.

She had to pull out of last year's contest after coming into contact with someone with Covid.

Grimsby extend their lead at the top of the National League table with a win over Yeovil at Blundell Park.