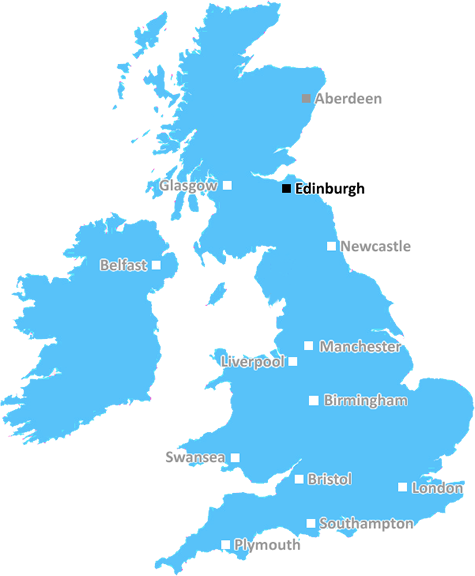 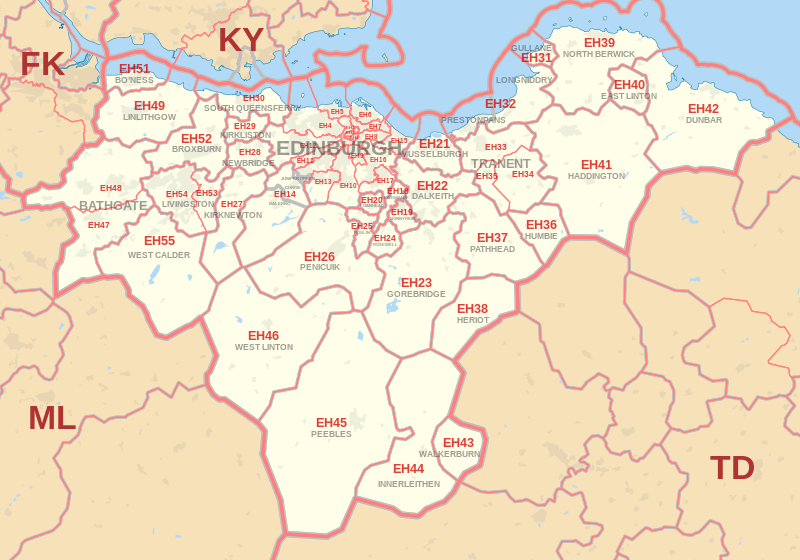 Each 'outward' postcode give you a comprehensive list of all postcodes within the outward code area (EH) and estimated address.

The county of Midlothian is one of 32 Scottish council areas and is a lieutenancy area. It is bounded by the City of Edinburgh, East Lothian and the Scottish Borders regions. Located just 10 miles from Edinburgh it is a gorgeous county, defined by the Pentland Hills in the west and the Moorfoot Hills in the south with undulating hills and thick wooded countryside in between. It is also packed with historic sites.

Vogerie Country Park for example, near Gorebridge, is a magnificent 19th century estate that is surrounded by farmland and woodland and features a formal park and a wonderful walled garden.

Another famous attraction is Rosslyn Chapel, a splendid 15th century Gothic structure famous for its beautiful carvings and association with the Knights Templar (and more recently, its place in Dan Brown's 'Da Vinci Code.').

There are hundreds of other outstanding historical sites, from Arniston Houst to Borthwick Castle, Dalhousie Castle to Newbattle Abbey, Roslin Castle to Roslin Glen Country Park, Dalkeith Palace to Wallace's Cave. In addition the Scottish Mining Museum is one of the best examples of a Victorian colliery in all of the UK.

Most visitors to Midloathian will be there for Edinburgh however, and what a city it is. From the Old Town and New Town districts now listed as UNESCO World Heritage sites to the bohemian nightlife in the shadow of 15th century buildings; from Canongate Kirk to Greyfriars Kirk to Holyrood Abbey and Edinburgh Castle towering over the city, there is history everywhere.

For architecture buffs, Edinburgh has it all from battlements and castles to Charlotte Square to the City Chambers, (designed by John Adam) and for art lovers The National Gallery of Scotland and the Scottish National Gallery of Modern Art are among the finest in the world. No trip to the UK is complete without stopping in wonderful corner of Scotland.

The Edinburgh postcode region (EH) contains 54 unique 'outward' codes. Edinburgh is the main postal town/district for this region, with all postcodes starting with the following outward codes.

There's plenty of local information, guides and useful data to browse and explore, whether you're a Edinburgh resident or a visitor to the area.

Scroll down to discover all you need to know about the Edinburgh postcode area.