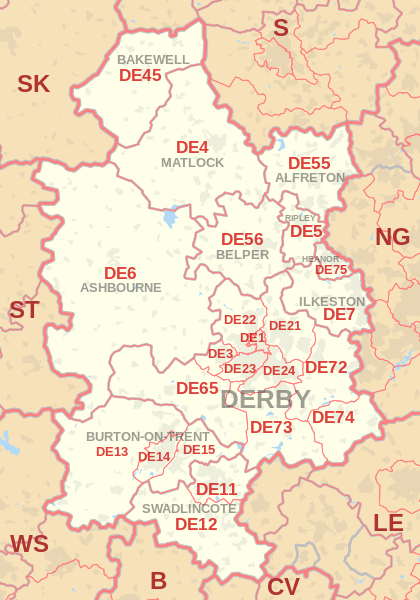 Each 'outward' postcode give you a comprehensive list of all postcodes within the outward code area (DE) and estimated address. 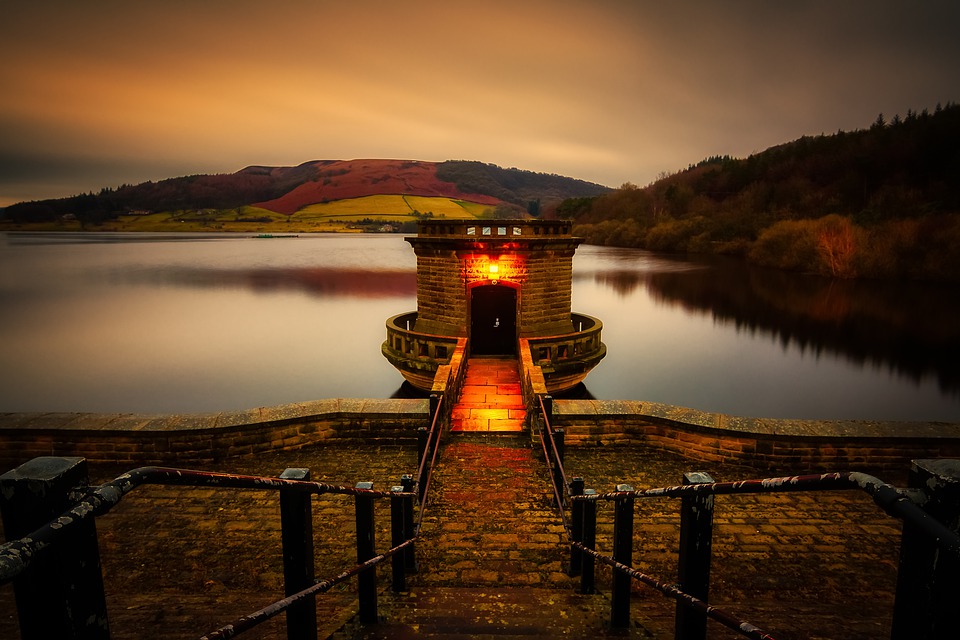 Known as one of the most picturesque counties in the UK, Derbyshire offers the quintessential green pastures and gamboling lambs of the English countryside, intersected by tumble-down stone walls, large and remote farms, grey stone villages, desolate and beautiful moorland and miles and miles of rolling hills.

Perhaps unsurprisingly much of the landscape is part of the Peak District National Park but there is also some breathtaking scenery in other areas of the county.

It has been inhabited for over 200,000 years and there are numerous Paleolithic, Neolithic and Stone Age sites scattered around the county. In addition there are some wonderful Neolithic burial tombs in Five Wells and Minning Low that date back to about 2500 BC. There are a number of Bronze Age sites in the Peak District and plenty of evidence of the later Roman invasion, especially around the warm springs of Buxton.

Indeed Buxton, an elegant spa town, is one of Derbyshire's historical highlights as are the dramatic town of Matlock Bath, Bolsover Castle, Castleton, Kedleston Hall and the National Trust run properties at Calke Abbey, Hardwick Hall, High Peak Estate and Sudbury Hall. For outdoor pursuits there is the area around the reservoirs of Ladybower, Derwent and Howden which offers hiking and cycling trails.

But for the great outdoors itself nothing beats the Peak District and sites such as Kinder Scout and Mam Tor, as well as hundreds of miles of peatlands, steep sided valleys and rocky crags. Derbyshire truly deserves its title as 'the backbone of the country.'

The Derby postcode region (DE) contains 23 unique 'outward' codes. Derby is the main postal town/district for this region, with all postcodes starting with the following outward codes.

There's plenty of local information, guides and useful data to browse and explore, whether you're a Derby resident or a visitor to the area.

Scroll down to discover all you need to know about the Derby postcode area.

Derbyshire Police appeal after man, 53, stabbed in the cheek in Chesterfield

Appeal to find missing teenager, 15, thought to be in Chesterfield

Kyle Hughes, 15, was reported missing from his home in Wales at the weekend

Two eye witnesses are the latest to give their evidence

A515 crash: Driver arrested after car smashes through wall

Derbyshire Dog body-slams puppy 'like something out of WWE'

What are the Covid variants and will vaccines still work?

A new Covid variant has emerged that looks worryingly different to the one vaccines were designed to fight.